12
18
In 1970 GM introduced the world to the GMC Jimmy. Over the course of two decades and change the jimmy devolved from rock crawler to mall crawler while its buyers evolved from rough and tumble outdoorsmen to prim and pampered suburbanites with a penchant for staring at their phones at every eternal traffic light.While the jimmy name suited its original era, by 1992 it became clear that Jimmy was a name better befitting your crazy uncle than GMC's bordering on luxurious sport utility. So, like any good subdivision named for the natural beauty it bulldozed and replaced with asphalt and Kentucky bluegrass, the rock crawling Jimmy became the mall crawling Yukon.While the Yukon became a more sophisticated and well mannered vehicle, it was never particularly easy to load a family into. As such it grew two more doors in 1995 and became the proper "I won't be caught dead in a minivan" family hauler we know and love today. Fast forward to 1999 and beyond to the Denali era and suddenly the Yukon has become a cultural status icon of you and your broods' projected prosperity on the Suburban stage, right up until Jimmy rolls by in his Escalade as a reminder of what could have been if those pockets reached just a bit deeper.But no matter. You're no idiot. You know Denali shares its bones with both the mighty Escalade and the lowly Tahoe and as such depreciation is the cruel mistress they all share ensuring you get the pick of the litter. Yes, given enough time and miles, suddenly all three of these triplets are affordable leaving the ultimate decision coming down to which looks, feels and is optioned best for you.

And what better choice than this fine example from 2008? Complete with the luxurious Denali trim and featuring a burly 6.2l V8 to haul both your love handles and those you love to handle in style and comfort. Comfort found in the form of four heated leather bucket seats, heated steering wheel, and even a DVD player to keep the kids distracted, all for under $15,000. What a time to be alive!

Stop by anytime to check out and test drive this beast of burden. 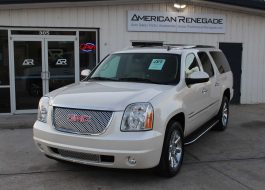